This store requires javascript to be enabled for some features to work correctly.

SPRING PRE-SALE EVENT LIVE NOW!!! 15% OFF FOR ALL EARLY ADOPTERS!
ALSO TAKE 40% OFF ALL FLANNELS! USE CODE: SPRINGFLANNEL 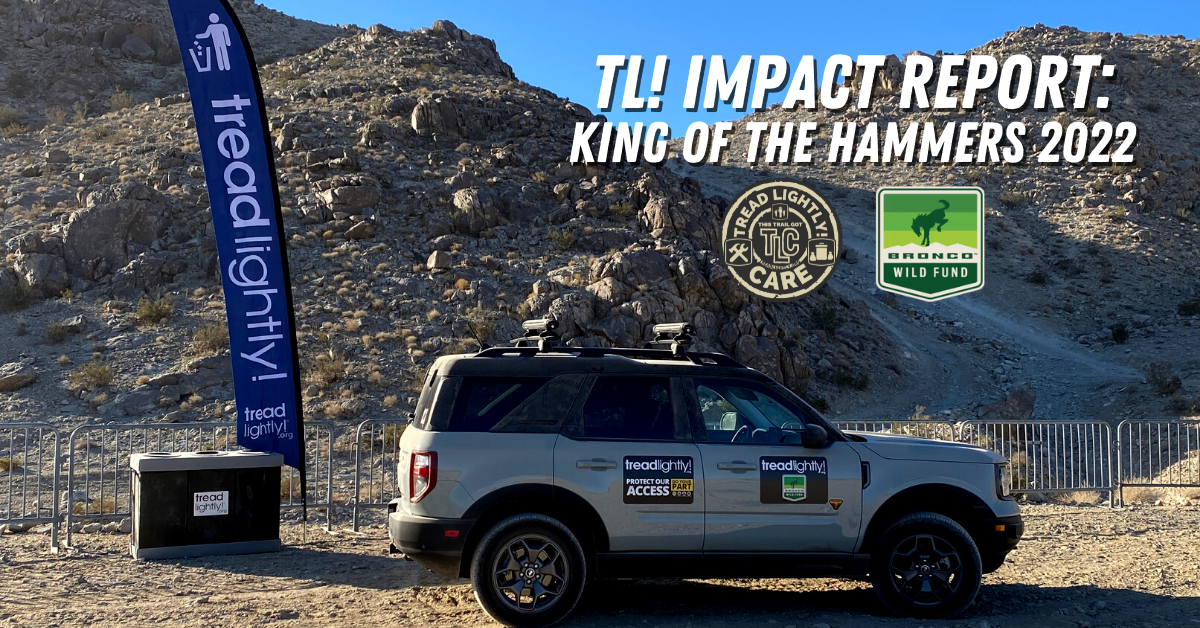 Description:
This project was completed in collaboration with the Bronco Wild Fund, Ford’s initiative to help build a legacy of access, preservation, and stewardship. A portion of the profits of every Ford Bronco sold goes directly to support responsible access and preservation of public lands.

From January 30 through February 6, 2022, Tread Lightly! hosted daily cleanups at spectator areas during the King of the Hammers off-road racing event. Each day, Tread Lightly! met volunteers at Chocolate Thunder and Backdoor, two main spectator areas at the races, to clean up trash left behind and pack out trash bags from receptacles placed by the Tread Lightly! team. In total 6,075 lbs. of trash were removed from the areas throughout the week. Most days, 20 volunteers or more from the off-road community showed up to help clean up.

This is the fourth year where Tread Lightly! has hosted daily cleanups at King of the Hammers. In 2022, King of the Hammers hosted over 85,000 attendees, but less trash was left in these areas thanks to spectators doing their part each day to pack out trash and leave the desert clean. Much of that success is attributed to the education and communication efforts of Tread Lightly!

Tread Lightly! would like to thank the many volunteers and organizations who helped leave this area better than they found it.  And a very special “thank you” to Ford, Ford Performance and the Bronco Wild Fund for the amazing support of the Tread Lightly! stewardship efforts at King of the Hammers.

“The King of the Hammers event is the second largest Bureau of Land Management permitted event in the country with the potential for high impact on the Johnson Valley area. Through the work of Tread Lightly! and the event promoter, we continue to see positive work completed during the event and immediately following the event. This work significantly minimized the impact on the valley and actually, resulted in the area being left in a better state following the event, even with the record numbers of attendance this year! It has been wonderful to the see the effort Tread Lightly! has put in to bringing awareness and education to the public and OHV enthusiasts. Tread Lightly! inspires people to be good stewards of the land, and King of The Hammers is just one example of how they help put that inspiration into action! We greatly appreciate Tread Lightly! and the event promoter working together to make this possible, and we hope to nurture this partnership so that we can continue these collaborative efforts!” –Chailenn Young, Outdoor Recreation Planner, Bureau of Land Management

“King of the Hammers has been and always will be synonymous with Johnson Valley, so what better way for us to continue to protect the access that we fought so hard for, than to partner with Tread Lightly! Leaving this place better has always been our goal at Ultra4 Racing and we know Tread Lightly! has the same vision. It just makes sense to support their efforts.”-Dave Cole, President / CEO, Hammerking Productions

“We really appreciate Tread Lightly! being part of our event and working to keep Johnson Valley beautiful. Coming from an off-road family, I’m grateful to know that their efforts will help to preserve off-roading opportunities for my family now and future generations as well..”-Ryan Thomas, President / CEO, Ultra4 Racing

“This wasn’t just about cleaning up the desert during the event. This is a huge educational opportunity where we can lead by example and show the off-road community what it means to ‘Do Your Part’ and ‘Leave It Better’. What better place to do that than at King of the Hammers and with the support of the Bronco Wild Fund, how can you go wrong.”-Matt Caldwell, Executive Director, Tread Lightly!

“As a first timer at KOH and seeing the massive number of people attending, I was expecting trash everywhere.  While we did collect a large amount of trash, many were respectful of using the trash receptacles we provided.  It appeared people were getting our message to ‘Do Their Part’ in helping keep these spectator areas safe, open and accessible.”-Lowell Eckart, Program Manager, Tread Lightly!

“The Bronco Wild Fund collaboration with Tread Lightly! provided a great opportunity for Ford to further activate their presence at King of the Hammers and to see a Team Bronco member like Shelby Hall being part of the cleanup and giving back to public lands completely brought this activation to life .”-Tom Zielinski, President, Z Performance Group and Tread Lightly! Board Member

For anyone that’s been to KOH, they will immediately know how large of a need there is to keep this iconic area clean on a daily basis. Our ultimate goal with contributing to these clean-up efforts is really to ensure continued access to this area by being proper stewards of the land and keeping the area clean. Without these efforts, these areas could easily become overwhelmed with garbage which then gives the entire off-road industry a poor reputation; it’s important for us to not allow the actions of a minority of folks represent the majority of us off-roaders.”-Taylor Ulrich, Brand Marketing Manager, KcHiLiTES

“It would have been easy to cite budget issues as an excuse to absolve ourselves of any commitment. But we are able bodied and passionate about the off-road world. As such, it was important to commit ourselves and our time every morning we were able to at KOH to help in the effort and also lead by example. If we can do it, so can other companies. We just need to do our part.”-Ali Sedaghat, Director of Marketing, Off the Grid Surplus

“Contributing to the clean up at KOH, provided a wonderful opportunity to lead by example and highlight the importance of maintaining the environment to an audience that may not have experienced Tread Lightly before or been exposed to outdoor ethics. I feel that if more platforms, like KOH, help get the message out regarding outdoor ethics that we can make a sizable dent in the conditions that environments are being left in for the better.”-Jessi Puffenbarger, Mythosaur Motorsports

“It was an honor to be a part of the trail clean up efforts at this year’s King of the Hammers. I think it’s important to lead by example and show others that responsibility doesn’t have to be boring. There’s nothing dull about KOH and I think these morning clean-ups really had a positive and educational impact on attendees. With the presence of TL banners, trash receptacles, and clean-up volunteers . . . there seemed to be less and less trash left behind from the night before . . . . and that’s saying something.”-Erick Miller, Owner, Conquered Trailz